I am so happy to write a new post here after almost a whole year of stand by. I hope you will appreciate this return like I do.
I’m also extremely proud and impatient to show you this high detailed R1M. It’s not the first time I show a build from this gifted builder from Japan, Hiroshi Fukuzaki. I follow him on social networks since many years now and he blosw my mind with his builds.

The 2019 crew riders were then Katsuyuki Nakasuga, Alew Lowes and Michael dan der Mark.
As Suzuka 8 Hours is a high important race, Yamaha, like Honda or Kawasaki, got their weapon ready for the fight and the victory. The Tech21 factory R1M is just a piece of art with a lot of MotoGP technology inside. A real factory modern machine with a vintage touch due to the livery.

You are going to see that Hiroshi never let detail apart, and built a beautiful and accurate copy in 1/12 scale! Do I need to tell he started from the Tamiya R1M kit? But it also needed a Tamiya 2005 M1 kit, and a lot of scratch built parts…
From front to tail, all has been modified or made for a stunning result. I let you admire this #21 beauty:

I couldn’t end with just a small sentence, I had to show you crispy details from the fabrication process, that, to me, show even more clearly the talent of Hiroshi Fukuzaki.
Started from the fairings, that, even if they are based on the OEM piece, are very different. Specially the bottom section. As the factory bike doesn’t have catalytic exhaust (when the street legal has one), the bottom cowl is very different. The sides too are modified with more aero and race spec. Some parts were machined from aluminum or brass like the specific gas caps. The tank too, is modified to reproduce the factory piece.

The front brake discs, for instance, were made from machined aluminum while the plastic hubs are from a model:

I’ve been captivated by the machined wheels axle cons and the stands hooks made from styrene. We recognise the ’05 M1 front fork bottom from the Tamiya front fork set, modified to become KYB fork:

The chain kit had to be realistic, so the Top Studio set was the ideal item for that. The rear sprocket was also modified like the Yamaha factory one.

Other small details, fine pieces that make the differences for connoisseurs like us:

But… what would be an Endurance racer without lights? Hiroshi also gave front and rear lights to his creation, amazing!!!

He’s a member in the genius modelers list. His Tech21 R1M really looks the same as the real racer. So much custom made parts, with so much accuracy! And you haven’t seen his other Yamaha…. It will be for another article.
I hope you enjoyed reading this post like I enjoyed writing it. The blog is now back and I will do my best to publish as often as I can.

Some of you who follow me on Facebook or Instagram might remember I had announced a brand new website with tons of news inside. This project is not forgot but these last weeks have been tough for me, like most of you.
Unfortunately, I won’t be able to get this new website online for now.
But my biggest hopes are that all of you and your families are safe and were not infected by this virus that changed our world forever.
So, for this year, I think that I will keep working and publishing here, and we’ll see later for this big big project I’ve been working on.
Another thing…. 112on2 is part of another project, this time we talk about a scale model! I’m not the major actor of this new challenge but I’ve launched the idea of this bike kit with the 2 entities that are involved and put them in contact.
At this point, we didn’t know what would happen.
They have decided to work together and perhaps release this model. Can’t tell more about it yet. All I can tell is that this model will be the result of a collaboration between a motorcycle company and a scale model maker….I know lot of you will be mind blown once this 1/12 scale model will be revealed… 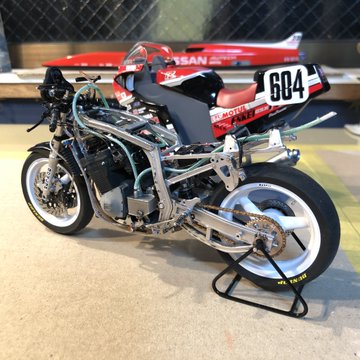